The Genetic Basis of Inheritance

Have you ever wondered why we all look like our parents or grandparents? You are not the only one tackling with this enigma. In fact, this resemblance between parents and offspring has always aroused the curiosity of humankind. Many thinkers have tried to solve the mystery of how traits are transmitted generation after generation. However, it was not until 1866, when Gregor Mendel published his works on peas, that this enigma began to be explained by science.

Despite the huge importance that these discoveries would later assume, Mendel’s work remained ignored until 1900, when it was unearthed by the biologists Hugo de Vries, Carls Correns and Erich von Tschermak. However, Gregor Mendel went down in history as the legitimate discoverer of the genetic basis of inheritance and is considered the father of Genetics.

What can we learn from Mendelius?

The skin colour of imaginary beings called Mendelius is used in this game to explain the laws and principles of genetic inheritance. There are three types of families depending on their skin color: the red family, the beige family and the ochre family. This trait is determined in each individual by a gene with two alleles or genetic variations, one inherited from the father and the other from the mother. Red is associated with R allele, whereas beige is associated with B allele.
The skin colour will depend on how two alleles are combined: an RR individual is red, a BB individual is beige and an RB individual is bound to be ochre. Individuals with a pair of the same alleles are purebred and individuals with a pair of different alleles are called hybrids.

If two red individuals are crossed, the offspring are bound to be red, since both father and mother carry an R allele as shown below:

We will see the same results when two beige individuals cross. Every offspring will be beige: 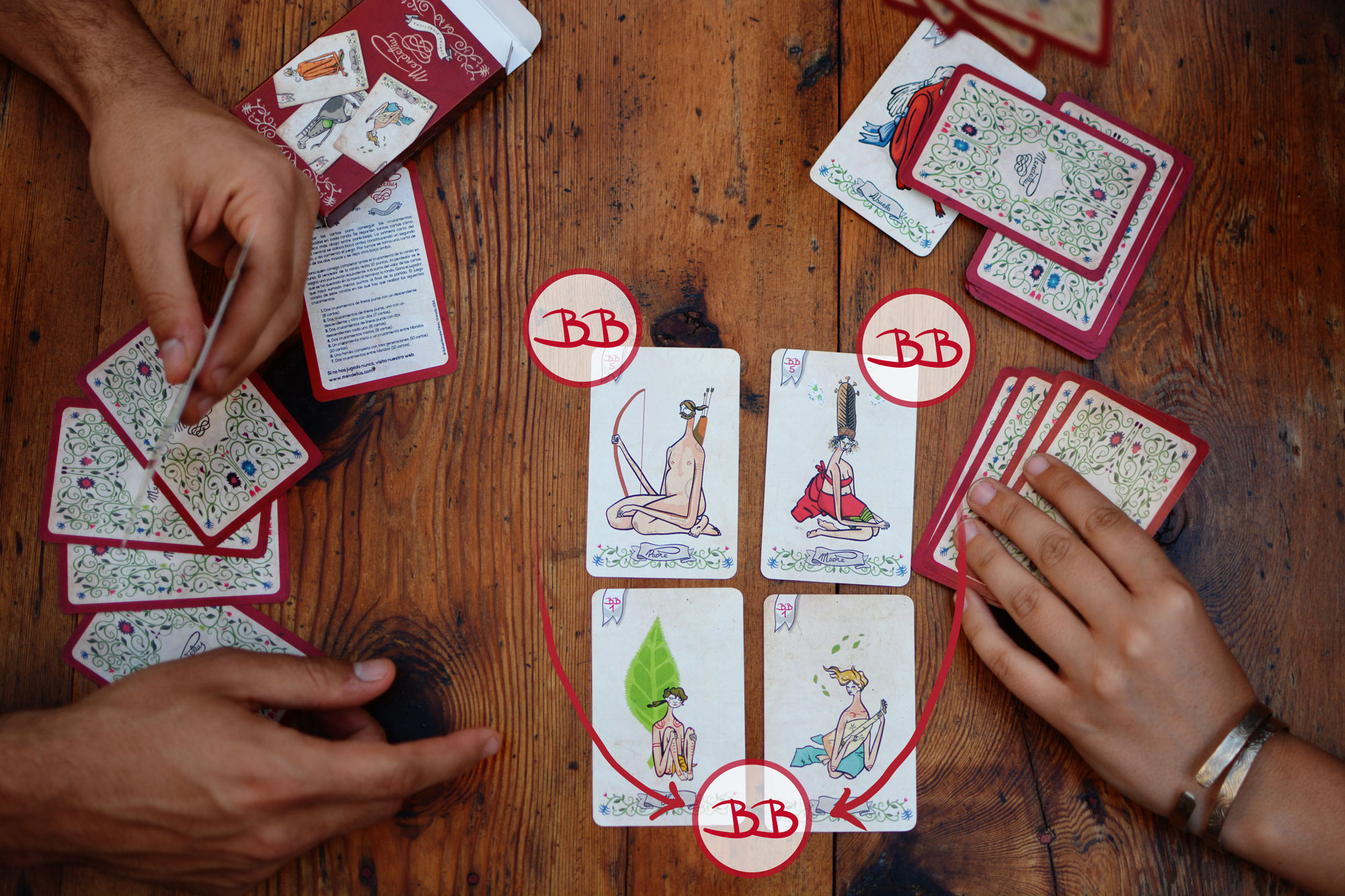 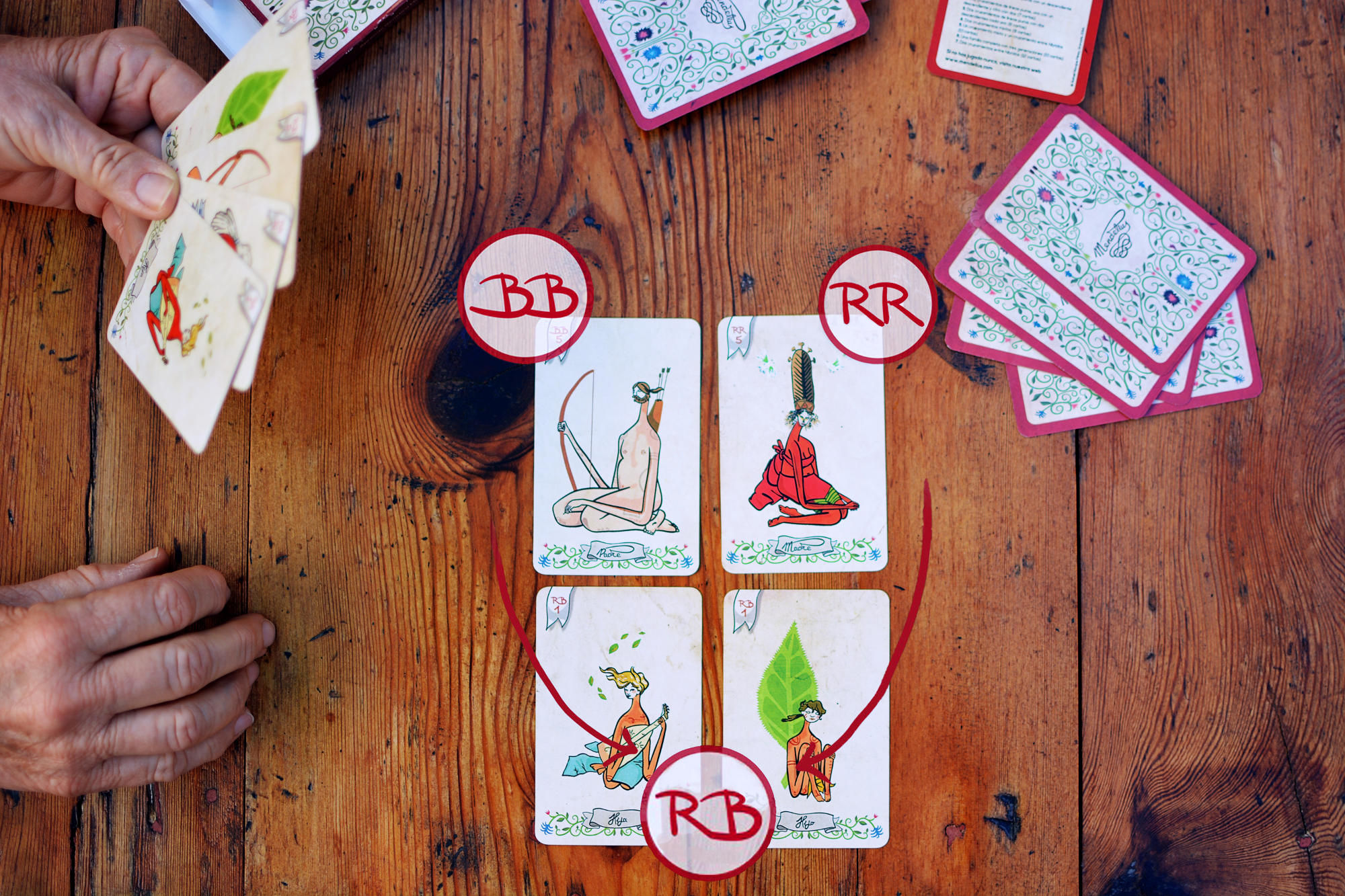 Mendel observed that a cross between two purebreds that differed in a given trait resulted in a first generation of offsprings identical to each other at the phenotypic (manifestation of the trait, in this case, skin color) and genotypic level (configuration of alleles, in this case RR, BB or RB). In some textbooks, this fact is described as the Principle of Uniformity. 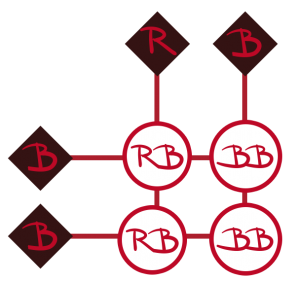 A cross between a purebred (red RR or beige BB) and a hybrid (ochre RB) is called here a mixed cross.

First, we are going to analyse the offspring obtained after the cross of a beige individual and an ochre one. The beige individual will always carry a B allele, whereas the ochre one has a 50% chance of inheriting a B allele and the other a 50% of inheriting an R allele. In order to see more clearly what effect this would have on offspring, we are going to use what we call in Biology the Punnett Square. In this picture you can find the gametes (ovules and spermatozoa, or reproductive cells) that form the beige parent in the first vertical column, while the gametes that form the ochre parent are represented in the first horizontal row. As we will explain later, gametes have a single allele for each gene, instead of two. Afterwards, you just have to fill the boxes inside the square making all possible combinations of gametes. Thus, the first gamete of a parent will be united with the first gamete of the other parent, the first gamete of a parent with the second of the other, and so on:

Then, the resulting proportions will be:

Likewise, to form a cross between a red individual and an ochre individual: 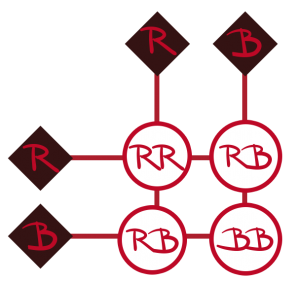 What happens when two ochre individuals cross? Each of them will provide the offspring with either an R allele or a B allele with an equal probability of 50%. So, using the Punnett Square again, the crossing would look like this: 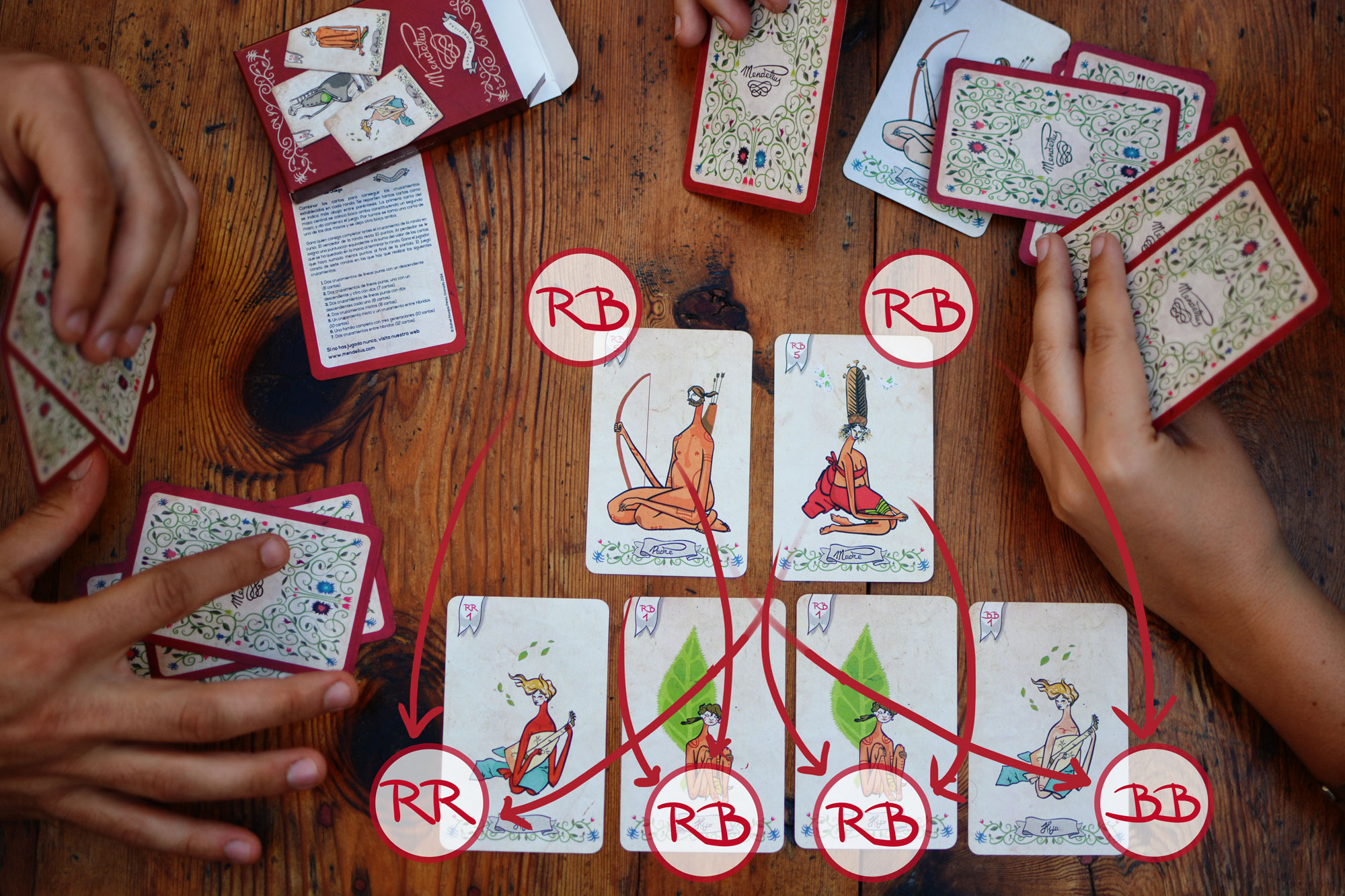 As Mendel observed this type of crossings, he realized that the genetic information of each individual for a trait is determined by two factors (now called alleles), that separate from each other during the formation of the gametes and rejoin after the fertilisation. The gametes, therefore, will only have one allele and not two like the rest of the non-reproductive cells. The biological purpose behind this phenomenon is to keep the amount of genetic information constant in the offspring, so that when the maternal and paternal gametes unite to breed, the number of alleles (2) is maintained, and one is always inherited from each parent. This phenomenon is known as Mendel’s First Law or the Law of Segregation of Alleles.

Nowadays we know that gametes go through a reductive cell division or meiosis, which reduces the genetic endowment by half, so that each gamete contains only one allele for each gene.

This only happens with unlinked genes, that is, genes that are on different chromosomes or very far within the same chromosome.