Mendelius is recommended for players aged over 15. However, anyone who wants to have fun learning the basic rules of Genetics can play!

Mendelius is completely free! You can download the full game here. You just need to print and cut the cards and then start to play! You can also purchase a deluxe edition in our online shop.

Mendelius is a card game played with one or several Mendelius decks (one deck per every 2 players/teams is needed). The aim is to be the first player to form different combinations or genetic crosses. The game consists of seven rounds of increasing difficulty. During each round several predetermined genetic crosses should be made. This also happens in other matching-card games, such as Continental Rummy and Gin Rummy.

Aim of the Game

You have to be the first player to combine the cards to form the genetic crosses required for each round. The winner of the round loses 10 points and the losers get a score equal to the value of the cards that the players hold after the round ends. The player with the lowest score at the end of the game wins.

Altogether, each deck includes 40 cards: a rules card, three wild cards and three Mendelius families (red, beige and ochre). Each family is formed by a grandma and a grandad, two mothers and two fathers, three daughters and three sons. Here you can find more information about them: 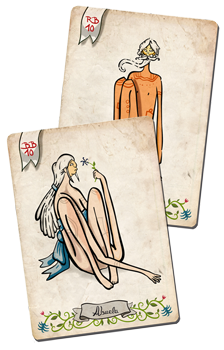 They can only cross between themselves and their direct offspring are mothers and fathers. 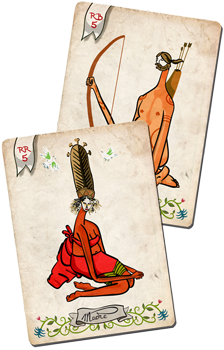 They are the direct offspring of the grandparents. They can only cross between themselves and their offspring are daughters and sons. 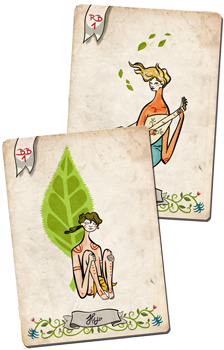 They are the direct offspring of the parents and they cannot cross between themselves. 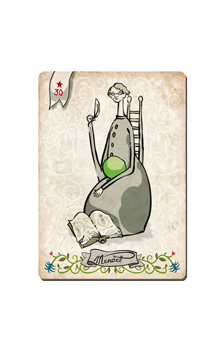 It is represented by Mendel. He can replace any card.

*On the upper left corner of the cards the numerical value and the genotype of the individuals (RR red, BB beige and RB ochre) are shown. 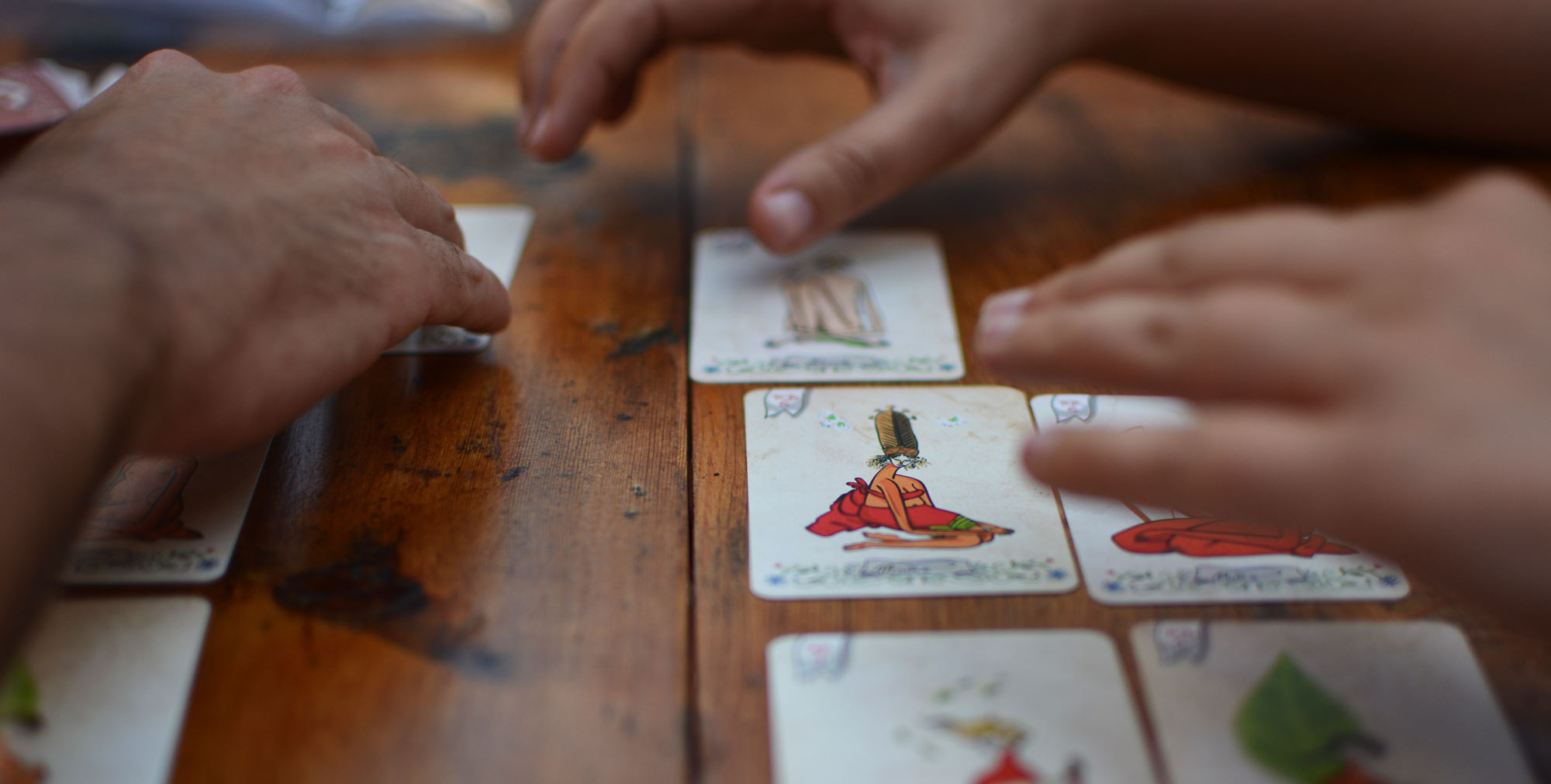 Setting up the Game:

Before starting, the order of play is drawn by handing out one card to each player. The one who gets the card with the highest number is the dealer. The dealer rotates each round clockwise. If two or more players get the same card, a tie-break takes place between them. The dealer must then shuffle the cards and, before dealing them, the player on the dealer’s right must cut the deck. Each player receives as many cards as indicated in the list of crosses below. In rounds 6 and 7 you can add the instruction card to the game, it will act as a fourth wild card. Once the deal is complete, the rest of the cards are placed in the middle of the table. The card on top of the deck must be placed face up next to it. The player on the left of the dealer starts the game.

In their turn, each player draws the top card from the deck, or may choose to draw the card face up. After drawing, the player must discard, leaving a card face up on the corresponding pile. Thus, the next player’s turn begins. For games with more than two players, each player has only one chance per round to draw the card facing up, even if it is not their turn, as long as the previous players do not require it. This player will lose their turn and must discard. The turn will be resumed where it was interrupted. If the first deck runs out of cards without any player completing the crosses, all cards will be placed face up. Each player will be assigned a score equal to the total value of the cards and the next round will begin.

When a player gets all the crosses for the current round and during their turn (after drawing a card), they must discard by placing their last card face down on the two decks shouting: Mendelius! Then, they must show the combined cards face up. This player gets a bonus of -10 points. The rest of the players gets a score equal to the value of the cards that they are holding after the round ends. At the end of the last round, the player with the lowest score is the winner of the game.

Take a look at some of the possible crosses that can be made:

1 Round.- Two crosses of purebred lines with one offspring (6 cards). [Theoretical Framework] 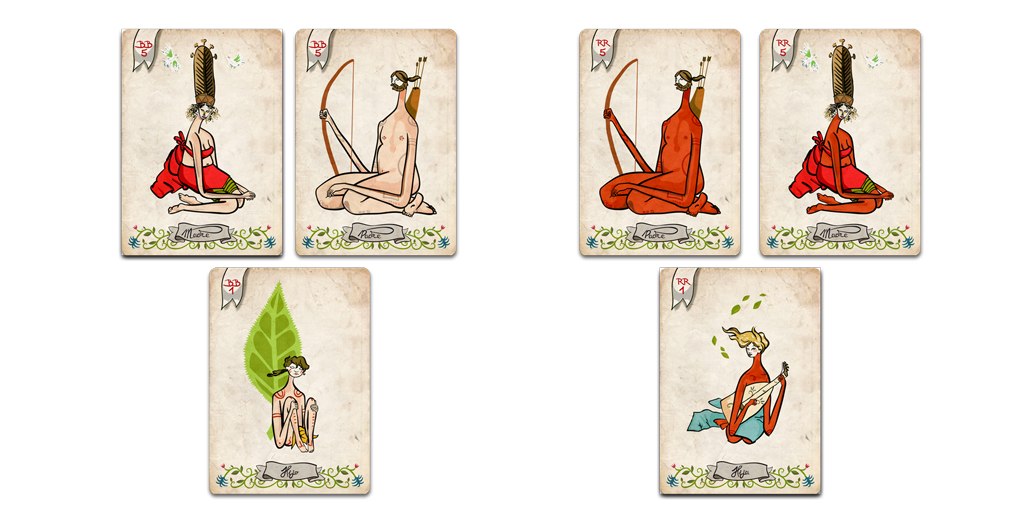 2 Round.- Two crosses of purebred lines, one with one offspring and the other with two (7 cards [Theoretical Framework] 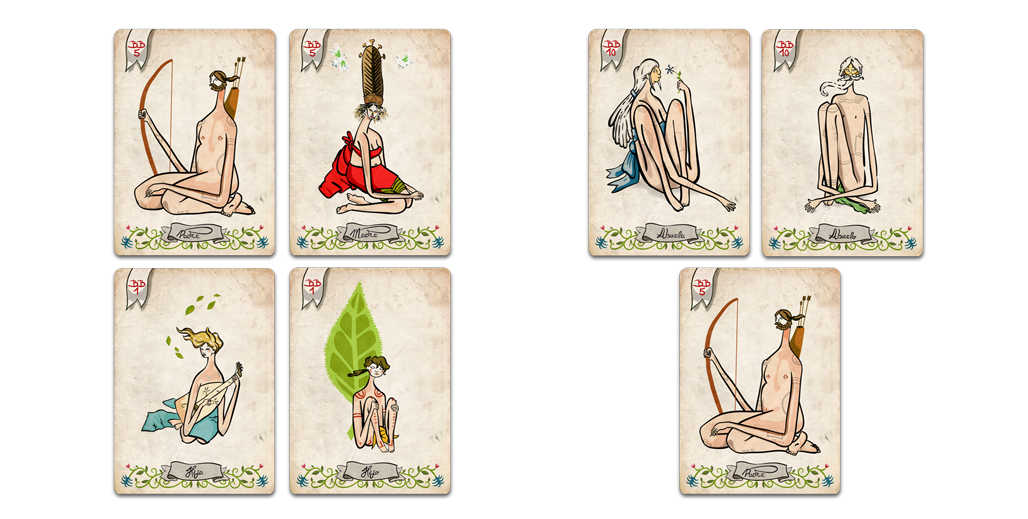 3 Round.- Two crosses of purebred lines with two offsprings each (8 cards). [Theoretical Framework] 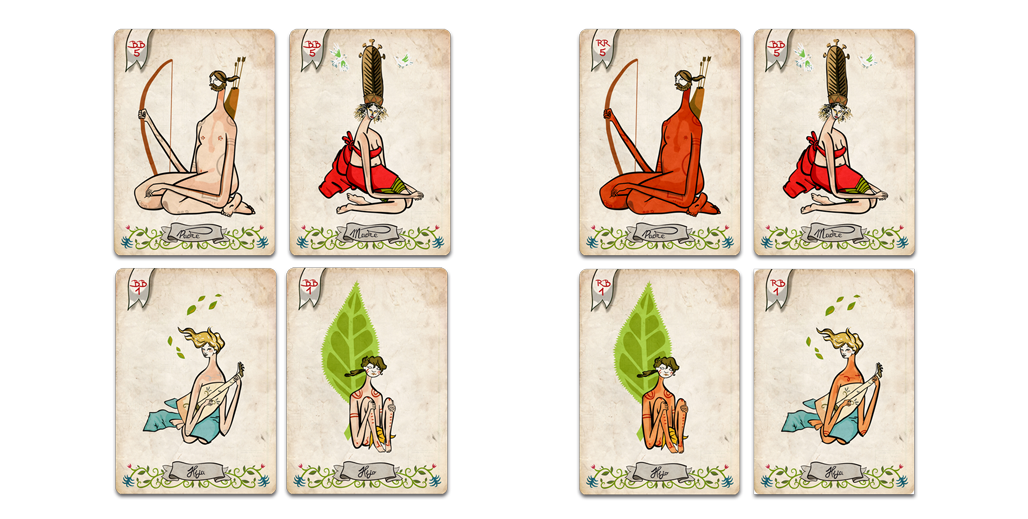 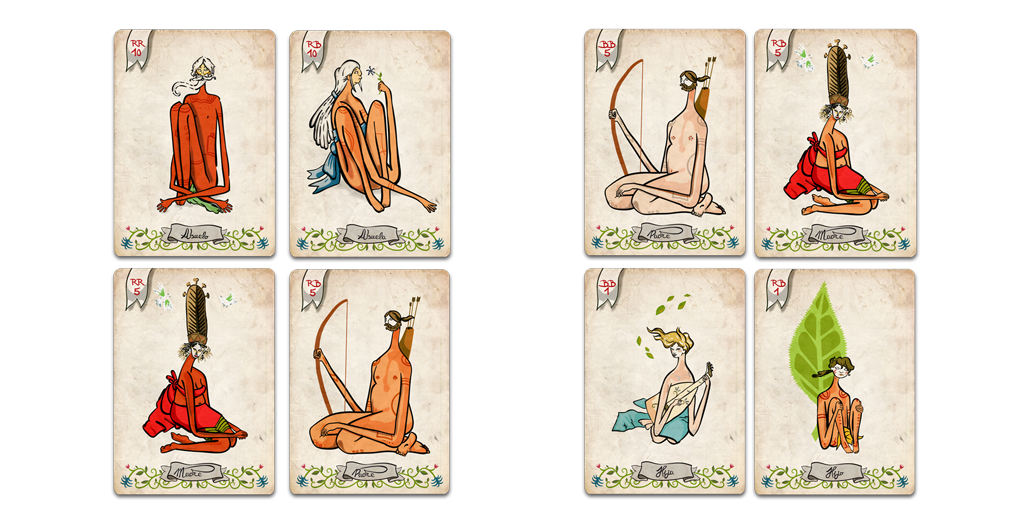 5 Round.- One mixed cross and one cross between hybrids (10 cards). [Theoretical Framwork] 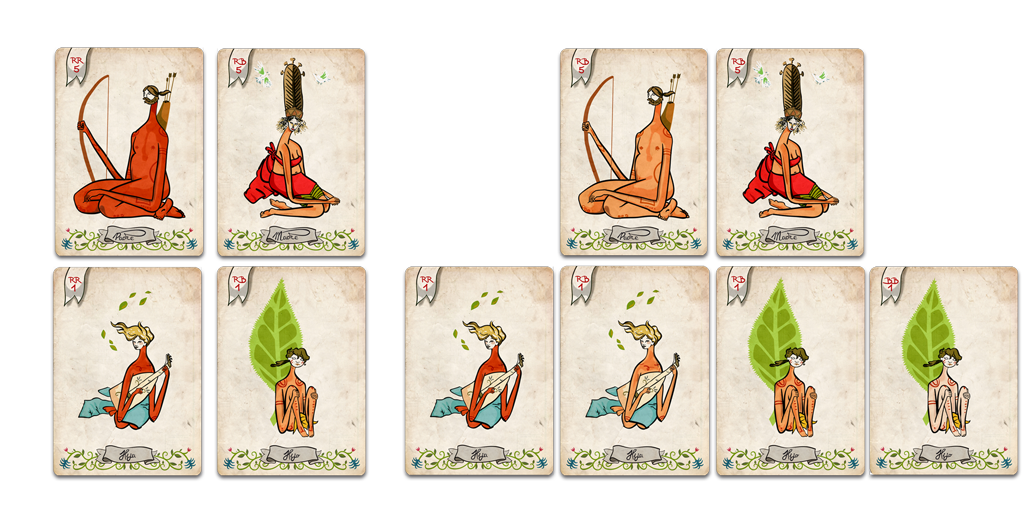 6 Round.- A whole family with three generations (10 cards). 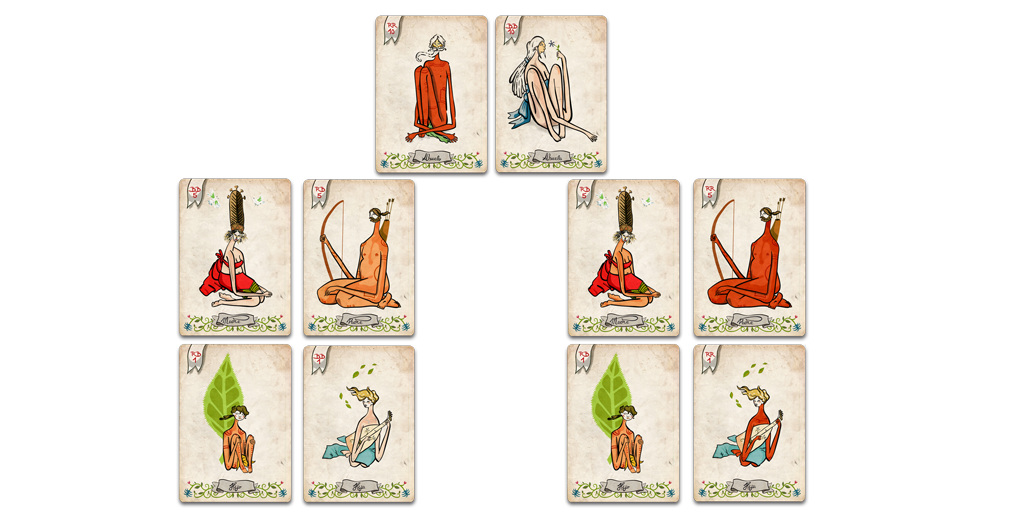 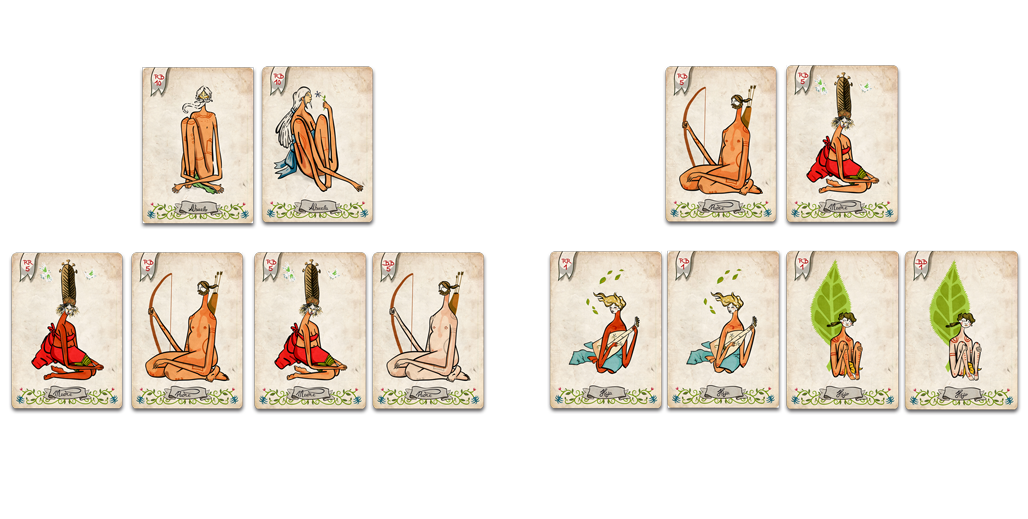 In the rounds in which several offspring are required, the number of female and male offspring must be the same.